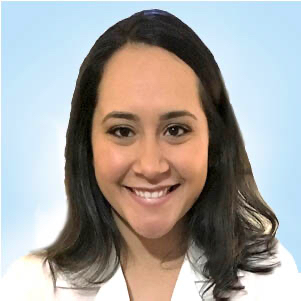 Dr. Elmore grew up in Orlando, FL and moved to Johnson City in 2017. She now lives in Bristol, TN with her husband and two cats, Rook and Wren. Her father is a civil engineer, her mother is a first grade teacher, and her sister is a registered nurse in Orlando.

She attended the University of Central Florida and graduated with a Bachelor of Science in Health Science with a minor in Health Services Administration in 2013. She then attended Salus University’s Pennsylvania College of Optometry and graduated in 2017.

She developed a love for hiking while previously living in Eastern Tennessee. She also fills much of her free time fostering kittens, watching movies, cross stitching, and traveling.